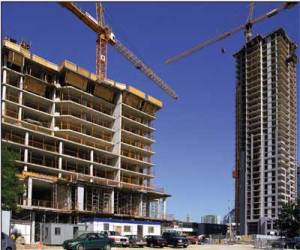 Construction in the condominium market slipped 3.7 per cent to 192,368 units in August compared to 199,813 in July, according to Canada Mortgage and Housing Corporation (CMHC) in a report release Tuesday.

“The currently elevated level of inventory of newly completed and unoccupied condominiums, and units under construction, supports CMHC’s view that condominium starts will likely see a declining trend over the coming months as developers and builders seek to limit risks of over-building,” said Bob Dugan, CMHC’s Chief Economist. “However, there may still be some variability from month to month as the number of presales for some planned condominium projects reaches sufficient levels to trigger project start.”

Overall housing starts – which include single-family units – fared better as a whole than the condo market, with August experiencing a slight increase of 189,837 units in August compared to 189,596 in July of this year.

Economists and real estate boards have been forecasting a soft landing for the condo market and CMHC’s latest data may signal the beginning.

The Conference Board of Canada was the latest pundit forecasting a soft landing for Canada’s condo market, though the optimism didn’t extend to some Canada’s more populous cities.

“The apartment condominium market enjoys a reason able outlook; after considerable angst about prospects of a general housing market crash, most analysts, including us, now believe the Canadian market is not a bubble about to burst, but will land softly,” their latest report, commissioned by Genworth Canada states. “There are pockets of higher risk, like potentially overbuilt condominium markets in several eastern cities, notably Toronto, and the possibility that slowing offshore demand could derail market recovery in Vancouver.”

One response to “The condo soft landing begins?”