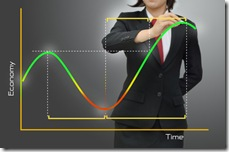 We’re at one of those points in the economic cycle where mortgage rates get especially confusing.

That’s got many wondering:

a) which side is most reflective of the long-term trend, and

b) how mortgage shoppers should position themselves?

The Gatekeepers of Rates

First off, here’s one basic point to reinforce. Two primary entities control the direction of mortgage rates in this country:

What the BoC is Saying

The Bank of Canada sets interest rates based on where it believes inflation is headed 18-24 months from now. Yesterday, the Bank conveyed three key points in that regard:

What the Bond Market is Saying

The bond that everyone in our industry watches is the 5-year “government of Canada” (GoC). Its yield jumped 10 basis points Thursday to 2.16%, a brand new 2-year high.

Traders have been selling bonds and pushing up long-term rates for four reasons, among others*:

* Bond prices and yields have an inverse relationship. If one goes up, the other goes down, and vice versa.

What Analysts are Saying

Most of Canada’s market prognosticators envision the next BoC rate increase in late 2014. That roughly coincides with financial market bets, where OIS traders are pricing in the next hike by September 2014.

In the words of CAAMP economist Will Dunning, however, “…Frankly, forecasting does not work.” Take these projections with a wad of skepticism.

What it Boils Down To

Despite the technical damage currently being done to the bond market, there’s a cold reality in today’s rate environment:

A well-qualified risk tolerant borrower (e.g. someone with 20%+ equity, great credit, strong provable income, and 10+ years paid down on their mortgage) would do well to consider a short-to-medium term mortgage if the rate savings were big enough compared to 4- and 5-year terms.

For example, if the best 5-year fixed was 3.59%, and the best 1-year fixed was 2.49%, that’s a spread of 110 basis points. This is enough to absorb 175 basis points of rate increases, spread out over the next 48 months—making the 1-year term a reasonable gamble for sound borrowers.

If your financial circumstances aren’t so robust, 4- and 5-year fixed terms remain at just a stone’s throw (80-basis points or less) from their record lows. Those are rates that people would have begged and stole for back in 2000.