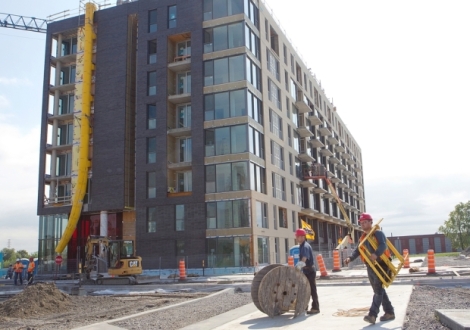 MONTREAL — Greater Montreal condo sales rebounded in August to the same level as in 2011, in a sign that the housing market in Canada’s second-largest city is stabilizing — but not heating up — following the July 2012 tightening of rules on insured mortgages.

Condo sales rose 17 per cent, year over year, on Montreal Island — the best result for a month of August since 2009 — in what the Greater Montreal Real Estate Board called an “encouraging sign” for a sector frequently cited as being at risk of overbuilding. But analysts warned Monday against interpreting strong August sales for Montreal — or for other Canadian cities like Vancouver — as signs of a new housing boom, given that the results for the same month in 2012 were historically weak and one month of data doesn’t make a trend.

“We are not overheating at all, it’s more like we’re catching-up,” said Nicolas Ayotte, president and chief executive of the Quebec-based real estate agency Via Capitale. “The last half of last year was pretty bad.

While Greater Montreal sales in all housing categories still lag behind 2011 levels, sales rose three per cent last month in the first increase since July 2012, the board said. That’s when the federal government tightened its financing rules, reducing the maximum amortization period on insured mortgages from 30 years to 25 years, among other changes.

Montreal’s condo market still favours buyers, noted Paul Cardinal, director of the market analysis department at the Quebec Federation of Real Estate Boards. The market’s already vast supply of condos for sale increased by 23 per cent in August, with prices remaining flat year-to-date at $225,000 for the region and at $265,000 for Montreal Island.

While new home construction is slowing, the record-high level of condo inventory could take up to a year to drop.

“The impact of the decline in new construction isn’t something that we’ll see in a few months,” Cardinal said. Cardinal and other analysts warned against interpreting the strong August sales data as a trend for the rest of the year, or as a sign that buyers are speeding up their purchases to avoid rising mortgage rates.

“I would like to have more than a month of data to be able to confirm this information,” Cardinal said.

“I wouldn’t say that people are necessarily jumping into real estate to avoid a rise in rates,” added Krishen Rangasamy, senior economist at National Bank. “Our view is not pessimistic, but it’s also not very optimistic for the Canadian housing market. The boom that we saw in the past is now over.”

Also Monday, Statistics Canada reported that contractors took out building permits worth $8 billion in July, up 20.7 per cent from June, mainly from higher construction intentions for commercial buildings in Ontario, Alberta and Quebec. In the non-residential sector, the total value of building permits rose 45.5 per cent to $3.9 billion in July, with Ontario, Quebec and Alberta accounting for most of the increase.

The value of residential permits rose in five provinces, led largely by Quebec, followed by Alberta and Ontario. British Columbia, Saskatchewan and Nova Scotia accounted for most of the declines in July.

Canadian Press contributed to this report.