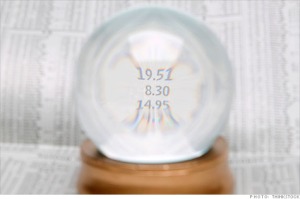 NEW YORK (Money Magazine) — So exactly how did 2012 shape up?
Here’s what Money magazine’s December 2011 issue said would happen — and how the year turned out.

The outlook. Don’t expect a recession, but don’t count on blistering growth either. GDP will rise just 2%.

What happened. A recession was averted, and the economic forecast was on target. GDP grew 2.1%.

The outlook. With profits growing briskly and interest rates at historic lows, stocks will post decent gains and beat bonds.

What happened. Earnings growth slowed, but stocks wound up posting spectacular returns of 14%, through the end of October, handily beating fixed income.

The outlook. The market will stabilize in most regions; prices will rise only 0.25% on average.

What happened. Most regions of the country did stabilize, though prices on average fell about 1%.

The outlook. The unemployment rate will remain uncomfortably high at 8.5%, but the pace of hiring will pick up slightly.

What happened. The rate of monthly job creation was about the same. Yet unemployment sank to a better-than-expected 7.9%.

The outlook. Savings accounts will pay next to nothing because the Fed is likely to keep short-term rates low until at least 2013.

What happened. Savings accounts paid near zilch, and the Fed now says it will keep rates low for even longer — until mid 2015.